Brooks earned a Master of Arts (MA) in Disaster and Emergency Management at Royal Roads University in 2016 and was honoured with Governor Generals Award (Gold) for the innovative creation of a tabletop exercise game about disaster resilience and risk as part of Master’s thesis.

Recognizing that tensions are increasing around the world in environmental, social, economic, and political spheres—fuelled by climate change, disasters, and conflict—Brooks sees an increased need for changes in traditional disaster management practices motivating him to pursue a Doctorate degree in Disasters at Royal Roads University.

Michael started his foray into medicine in 1985 as a medic in the US Navy/Marine Corps, serving as a critical care corpsman at Bethesda Naval Hospital. He was next stationed onboard the USS Canopus and worked with both the Medical Department and the US Marine detachment onboard the ship where he earned the nickname “Doc.” After getting out, Doc worked at Tucson Medical Center as a patient care technician in the Trauma Intensive Care Unit.

Mike has been with Slipstream since 1994. He has a long history of administering first aid, currently as Ski Patrol Supervisor on Cypress Bowl and previously as a First Aid Attendant for a reforestation firm. An avid fly fisherman and back-country traveler, Mike has explored much of British Columbia. Mike is one of our most experienced Wilderness First Aid instructors and he is also our resident Outdoor Emergency Care specialist.

Blue Netherclift was raised in a farming country in the southwest of England and graduated from Wye Agricultural College, London University, in 1996.

Developing his instruction and leadership skills at a climbing centre in the UK, he later went on to lead youth expeditions in Africa and South America. In 2005 he established a wilderness tourism company that ran wilderness trips to the Bella Coola region of central coast British Columbia. Working with fishing and hunting pioneers and indigenous guides, he created unique wilderness experiences that blended adventure and cultural learning.  He also created an outdoor leadership program for home school learners as a BC Independent Schools Teacher.

Blue enjoys the Kootenay lifestyle, based in Slocan City, with his young family, working as a facilitator for a local organization, in addition to teaching Wilderness First Aid with Slipstream.  As an avid skier, Blue has spent the last eight years ski patrolling at Whitewater Ski Resort and in the summer enjoys climbing, canoeing, hiking and camping. Blue has over 20 years of instructing and coaching experience.

Melinda joined Slipstream in August 2005 and now leads the quirky admin team, holding the official job title “Magician Juggler Tightrope-Walker Mind-Reader.” She is also fondly referred to by her coworkers as “The Voice of Reason.”Managing her family’s three businesses as a young adult, combined with completion of the masters program at the Victoria College of Art in 2004, prepared Melinda to meet the demands in creative and analytical thinking presented by her unique position at Slipstream Headquarters. Melinda finds great enjoyment in aimless wandering, sunny days, compulsive inspired creation including abstract drawing, painting, and photography, showing off her 1973 vintage Volkswagen Karmann Ghia, discovering the workings of the universe, and smooshing her four beautiful nephews.

Our Response to COVID-19

For updates please go to Our Response to COVID-19 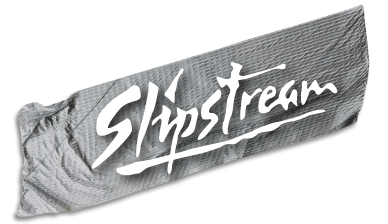 Questions About Your Course?